Liverpool will be looking to get back to winning ways in the Premier League when they host Wolves at Anfield on Saturday afternoon. 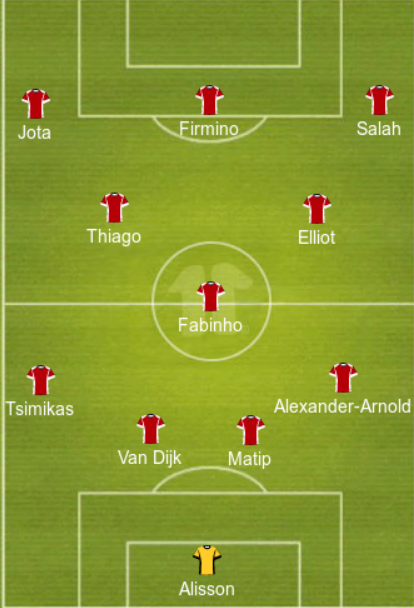 The Reds were held 0-0 by Everton in last weekend’s Merseyside derby which left them seventh on the table, six points behind league leaders Arsenal. The Merseysiders endured a miserable night in Napoli on Wednesday as they were beaten 4-1 by Napoli in the Champions League.

Jurgen Klopp will expect a big response from his squad this weekend after the horror show against Napoli in Italy.

Thiago Alcantara’s return from injury was one of the few positives Liverpool could bring back from Napoli, but Alex Oxlade-Chamberlain, Ibrahima Konate, Jordan Henderson, Naby Keita, Curtis Jones and Calvin Ramsay everyone stay away.

Fabio Carvalho wasn’t involved against Napoli due to a broken leg but the striker has a chance to be back in the squad against Bruno Lage’s Wolves.

Alisson Becker did his part against Napoli but ended up conceding four goals. He deserves more protection from defenders because Liverpool have been so easy to play with since the start of the new season.

The Reds were all over the place defensively in Napoli, and on another day it could have been an even more embarrassing scoreline. After seeing the likes of Joe Gomez, Trent Alexander-Arnold and Andy Robertson struggle, Jurgen Klopp is set to sound changes on Saturday.

Joel Matip is likely to replace Gomez to slot alongside Virgil van Dijk in central defence, while Kostas Tsimikas gets the green light on Robertson to start at left-back. With Calvin Ramsay injured, the Liverpool boss has no choice but to persist with Alexander-Arnold, who is really struggling with form at the moment.

Liverpool find themselves stretched when it comes to their midfield, leaving Klopp with limited options to select his squad. Fabinho remains an undisputed starter in midfield, and the Brazilian will have to control the flow of the game with his passing and game-reading skills.

Thiago Alcantara and Harvey Elliot will complete Liverpool’s midfield against Wolves. James Milner will be entitled to some rest, given that there is currently a shortage in midfield.

Due to a quick turnaround, Jurgen Klopp could refresh his attacking options. Roberto Firmino is expected to lead the line for Klopp’s side, with Diogo Jota set for his first start of the season. Mohamed Salah did not seem close to his best level but will keep his place on the right flank. The trio of Salah, Firmino and Jota will look to combine well in the final third and cause problems for Wolves’ backline.

Luis Diaz is expected to be on the bench for the game, with Darwin Nunez another attacking substitute.