Antonio Conte’s side are unbeaten so far this season and haven’t conceded in their last two games. They head to the London derby after a 2-0 success against newly promoted Nottingham Forest last weekend, thanks to a brace from Harry Kane.

Spurs are brimming with confidence at the moment and would be looking to go home with all three points against West Ham.

Cristian Romero and Oliver Skipp are return training with the squad with the Argentina defender in contention to return to the squad against West Ham.

Lucas Moura and Bryan Gil remain sidelined, while Rodrigo Bentancur is assessed for a concussion after sustaining a head injury in Tottenham’s 2-0 win at Nottingham Forest. 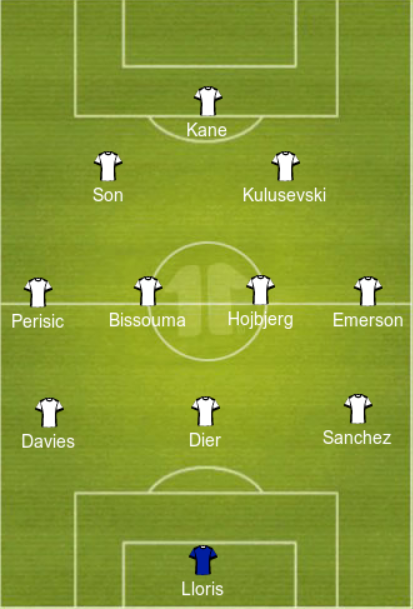 Back-to-back clean sheets should have given Hugo Lloris plenty of confidence ahead of what is expected to be a grueling campaign. The Frenchman will be eager to close shop as soon as possible against West Ham in midweek.

Ahead of Lloris, a back three of Davinson Sanchez, Eric Dier and Ben Davies are set to start – the same back line that kept a clean sheet at Nottingham Forest. Even though Cristian Romero is deemed fit enough to start, Antonio Conte will stay with Sanchez, Dier and Ben Davies in defence.

Due to a quick turnaround, Conte may prefer to rotate his options in the middle of the park. Moreover, Rodrigo Bentancur’s head injury will only strengthen the Spurs boss’s decision to hand Yves Bissouma his first start of the season.

Bissouma will partner Pierre-Emile Højbjerg in midfield, and the pair will look to get things done with their all-action style of play. Emerson Royal and Ivan Perisic will also retain their places, with the wingers providing energy, overlapping runs and intensity to Spurs’ game.

Fresh off a brace at Forest, Harry Kane is a shoo-in to lead Tottenham’s attack. The England international will be looking to continue a fantastic start to the season by also getting on the scoresheet against West Ham.

Unlike Kane, Son Heung-min has had a slow start to the new campaign, but Conte is expected to persist with the South Korean. Son and Dejan Kulusevski should be deployed as playmakers behind Kane.

Richarlison, who picked up an assist against Forest in the last game, will be the backup attacking option for Conte.